The Story of Bootblacking Boy Jeff.

This past year has brought so many changes… Necessary changes, because you reach a point in your life where it is important to be who you are, or better yet; to be who you want to be. But this is not another ‘coming out’ story. No, this is a ‘coming in’ story.

I have been a Leather man for quite a while. However, I live far up in the north of Scotland, practically halfway to Norway. As you can imagine our community is very small and my only chance to connect to the leather world has been by travelling to the big European leather events.

Now up until a year ago you could find me lurking around on the periphery of these events, pretending that since I am a ‘people watcher’, I simply have no need to be part of the group of guys at the end of the bar sharing a beer and enjoying their friendship. In reality, I would love to… but I am quite shy and didn’t think they would find me interesting… Walking up to them seemed a daunting and futile task. So I stayed on the side line.

At least, that was the situation one year ago. But so much has changed since then.

All starting when I found my Sir. With Sir’s constant support, encouragement, coaching and a firm but fair hand, I have become a much more confident, happy and ultimately complete person. And he introduced me to something that has changed how I see the leather world, but more importantly, how the leather world sees me: Bootblacking.

If you don’t know anything about Bootblacking I don’t blame you. It is not as visible a part of the European Leather culture as in, for example, the United States, where they can be seen at every event and are important members of the community. But that I know now: before Sir I knew nothing about it, even though I have always enjoyed a shiny boot…

As a teenager I had a weekend job in a stable. Working with the horses made me sneeze for Scotland so I would often hide away in the back-room, caring for the saddlery. The owner was a rather imposing and very handsome gentleman who looked exceptionally dashing in his riding breeches and tall boots. I took great pleasure in shining these boots and felt the first twinges of a love of leather developing. The object of my day dreams often reminded me that shining his boots wasn’t in my job description and therefore unnecessary. Needless to say, I thought it was necessary and I continued to shine the boots. The seed was sewn, but for what I wouldn’t know until much, much later.

Fast forward ahhemm….a few years and you will find me enjoying tending to Sir’s well-loved collection of boots, while He relaxes with a drink and puffs on a cigar, watching His boy working away at His feet. Now you should know that Sir has an uncanny ability to read His boy like a book… and one day, Sir peers at me for a while as I diligently work up a shine and then says ‘I have been thinking: there is someone I want you to meet’.

That someone was Karl. Karl is an immensely experienced and dedicated Bootblack in a long-standing London leather bar. The intense pleasure that he gains from bootblacking is palpable and that same pleasure is transferred from his saddle-soaped hands, directly though the leather and into the man in his chair. He is a sheer joy to watch. Karl is an inspiration, a wonderful teacher, mentor, and now a friend.

What follows is an immersion into a previously unknown world. Karl teaches me the basic techniques, but more importantly: his love for the craft is infectious. I start exploring the web to learn about all aspects of boot and leather care. Sir brings me in contact with a few well connected bootblacks, and they quickly invite me into their family that extends all over the world. I not only learn but experience their (our!) strong sense of the passing down of knowledge, of skills, and of leather heritage, and being part of this is a very special feeling, an honour even.

A few months later Karl sets me free with my public debut at Folsom Europe in Berlin. With a definite tinge of apprehension on my part we start our work outside one of the popular bars on Fuggerstraße and we are busy from the word go.  Before long two chairs appear, followed by a steady stream of cold beer. Then out of the corner of one eye I catch a glimpse of a very proud Sir looking on and my own heart swells with pride. It is hot, sticky and intense work, but when the last of the light finally fades and we have no choice but to pack up our brushes. I feel on top of the world and Karl agrees: I can now call myself a Bootblack. 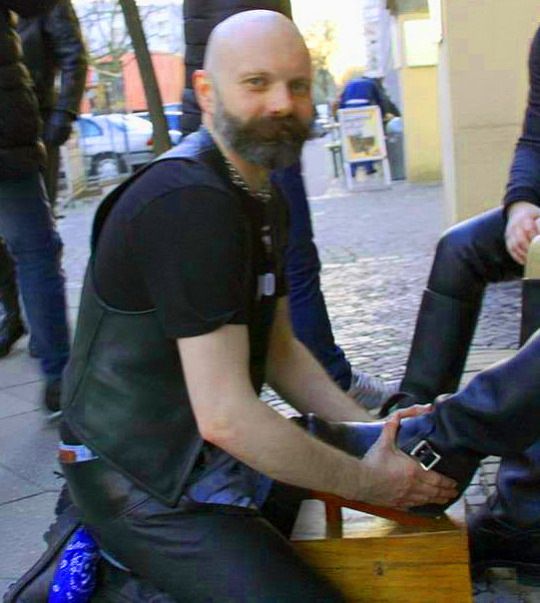 Lots of gentlemen appear unsure as to the protocol and look on from afar rather than jump at the chance to get in the chair.  Of course there is a protocol…

3)    If you want to leave a tip in the form of a donation to my charity then that’s fine.

5)    Remember I’m British, so if there is a queue (and there often is) play nicely and don’t jump! 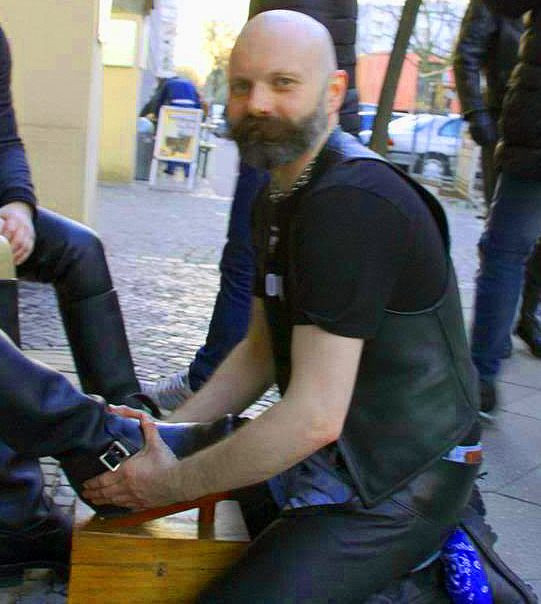 At first it seemed a complex and confusing art with so many waxes, polishes, greases and techniques, but with Karl there to coach me and generations’ worth of experience just a click away, the techniques have become an automatism, and I start to realise that bootblacking is so much more than cleaning boots. Shiny footwear is just one of the pleasures given and derived… Some bootblacks are driven by their senses and the love of the material, its musky smell, taste even, going from kneading to caressing as they grease a warm boot with their bare hands. For others the submission and Dominance of the experience resonate strongly, even though one could argue about who is actually submitting in this particular scenario…

For me it is all that, and so much more. It became clear to me last weekend, in Berlin. Karl not being there meant I had to do it myself, and it felt like the final test. But as I walk down Fuggerstraße with my trusty shoeshine box under my arm I hear the excited murmur, “Hey, it’s a bootblack!”. I am no longer lurking, and that hits me as I hear my name called. “Jeff, are you free, can I go get my boots for you”. I feel I have arrived at the end of the bar.

So whenever I get the chance I seek out the gentleman on his own, the gentleman watching on from the periphery. The one telling himself that he is simply a people watcher so doesn’t really need to join that group at the bar enjoying their friendships. The one that actually is a bit shy and maybe even a little lonely…This gentleman usually requires a bit of beckoning, often looking around him as if I’m gesturing to the BLUF man standing behind him. Because why would he be interesting? He will usually decline at least twice before reluctantly relenting and sitting.

But when he does sit he has the realisation that he is, for that moment, at the centre of everything: the bootblack has brought him in from the periphery and while I am at his feet focused on him and him alone, he is the second most important Leatherman in the world (my Sir will always be the first). And I like to think that the feeling continues beyond leaving the chair. Attention breeds confidence and anyway, who doesn’t want to feel wanted and just a little bit more important? 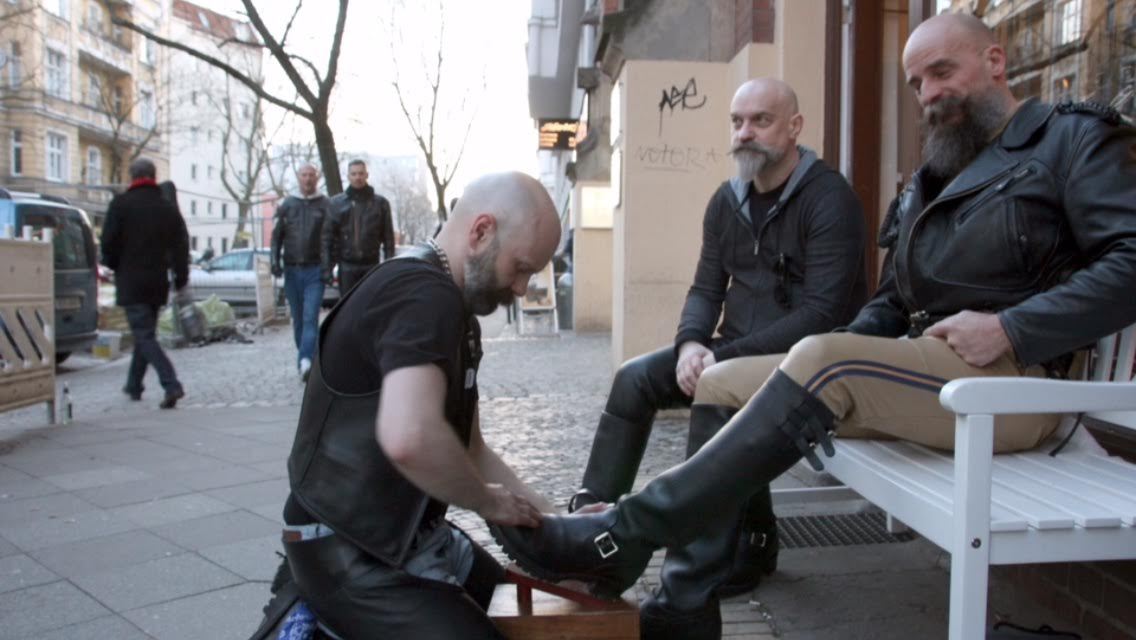 A Guide to Boot & Leather Care

Latex changes all the sensations