: I’ve been kinky for about 3 and half years now, discovering it when I saw someone on Grindr in rubber, never having seen it before and it sticking out of the crowd it immediately caught my attention and after talking to him he ended up letting me try on a spare suit he had and feel in love with, and from there I pretty much just continued to explore various things that I found interesting or hot, however for about 15 months just after discovering my kinky side I met my first boyfriend and ended up hiding it from him and burying it because I was still unsure about it, but eventually “coming out” as kinky to him which got a bad reaction by him asking me to choose between my kinky side or him, I ended up picking him and buried my kinky side even more which looking back was a huge mistake, after the break up I managed to find it again when I met my first handler who helped me get over it and discovered some of my most favourite kinks, and my puppy side and helped me be open and accepting of my kinky side.

Probably the way I live my kinky life out most is now on Twitter, with an ever growing following and becoming well known in the pup community and the wider kink community has given me a lot of amazing experiences and opportunities to not only discover new kinks, but to also make new friends and travel all over the UK and hopefully to Europe and the US in time as well. Through my Twitter I’ve made some of the most amazing connections and been able to be part of some amazing things like Pup Social which is held in my home city which has been a big supporter of me and has helped me let my pup side out and make new friends, but also as a great network for when I needed support, and also was lucky enough to march with so many amazing pups in the London Pride March in 2015 and hope to do it again this year as well with my amazing Alpha by my side.

sadOsam: What’s especially important for you there?

Pup Link: The most important thing for me is being open about my kinky life, being an out and proud pup is incredibly liberating and knowing I can be myself is something I’ve always struggled with but being a pup has been a massive help, and not only that but having people messaging me on Twitter telling me that seeing me being out and proud as a pup and kinky person has helped them be more open and accepting of their kinky side is something I massively appreciate and makes it seem even more worthwhile putting myself out there on social media.

Kink and my pup side has also been a massive help with mental health, suffering with depression and anxiety going into pup space or sub space is something not helps me escape the issue I’m having at the time and just be free of it all, and its why I value it so much, when people call me weird or wrong for being kinky I just think about how crucial it’s been to keeping me sane and safe and happy. It’s safe to say kink saved my life. Pup Link: Who doesn’t? Everyone is bound to have preferences and it’s what makes the community so interesting to be part of, because something I love someone might hate or think is strange. Of course pup play is one of my favourites, and then there is rubber and lycra and underwear, bondage and electro and just giving up control to someone I trust.

For me in particular I’m all about pleasing someone else, and I’m up for trying most things so if I give that control over to someone I never really expect something specific I just go with what happens because it’s not just about my enjoyment but the enjoyment of the other person, so obviously I’ll have boundaries and things I don’t like and won’t do but I’m usually quite easy to do stuff with as I’m up for most things. 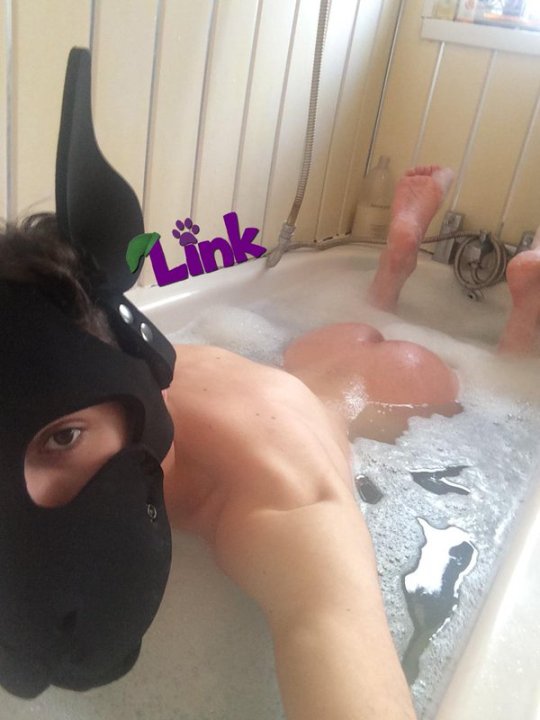 Pup Link: Like everyone I have my type, twinky guys and jocks, hairless and muscly guys but when it comes to kink types kind of go out the window and my type changes, being a sub I’m less interested in twinks because they’re more often subs as well (unless it’s a session being made to do something with other subs, but appearance becomes less important and experience and skill become paramount as they know what they’re doing and can make a session a lot more fun, however I have become quite partial to the muscly daddy type.

I admit as I’ve become kinkier I’m less uptight about type and have played and have had a lot of fun with guys who are definitely not my type and I have no issue with a bit of chub or hair because I like them as people and that’s what makes it more fun.

Pup Link: My hottest experience? Probably the time I went to see my puppy friend and his handler in Nottingham with my ex-boyfriend for a weekend, spent about 2 hours tied down with a gasmask and blindfold on in full rubber being slowly edged by electro, when I discovered my love for electro and got over my strange fear of gasmasks.

Falling in love more and more with exhibitionism walking through London in full rubber and then the London Pride March was also a very memorable and hot experience for me, feeling like I was basically naked outdoors was definitely an interesting experience and I can’t wait to do it again.

Pup Link: Honestly there aren’t many things left that I want to try as I’ve been fortunate enough to try most of them in terms of kink, I just want to add onto the experiences I’ve already had and explore what I’ve explored further. Only thing I can really think of is travelling the world and meeting all the kinky people I’ve made friends with around the world, most looking forward to meeting my Alpha when he visits from the US.