A report written by LukeRubberPig. 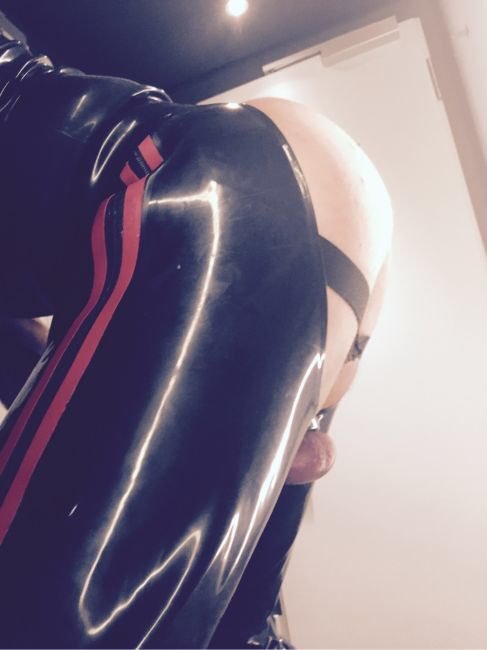 As i slept in my dark rubbery cell i was woken by the sound of sling chains clanging together. I listened as i laid still, I could hear moaning as well as banging and clanging. I silently peeped round to look through my bars to see my master in all his rubber finery fucking boy 206. I could see my masters big throbbing veiny dick sliding deep into boy 206’s ass and withdrawing with a glistening sheen of lube and boy juice. Boy 206 was laid there taking it like the professional toy he was. The sling swung out then came back perfectly positioned to receive masters cock deeper. The boys hole willingly accepting its raw deserved pounding and dripping accordingly. I noticed my master playing with boy 206’s rock hard cock, which he never does usually. Boy began to respond by squirming and arching his back. I could see him squinting his eyes as his horn takes him deeper. Master intently massaging the boys cock while pounding him deep with timed equal rhythm. Trickles of liquid was seeping from the boys hole and onto the floor, i realised that master was piss fucking him which made the moans groan louder. Master began to pick up speed with his pounding and his jerking. The boys body tensed up and shook violently, He began to gasp for air between long gaps. Then suddenly a huge jet of cum flew from the boys cock and hit the wall behind him, followed by more jets over his head then on his face and chest. The boy screamed out as his cock shot out load after load. Master also let out a huge grunt, moaning loudly as he shot inside his boy toy. They both remained as they gasped for breath, i could see all the rubber glisten in the dark from all the body fluids. Master helped boy 206 out of the sling and helped him back into his cell. I laid in my cell pretending to be asleep as master walked past, I could smell the piss and cum from his rubber and desperately wanted to be next. He spat at me through the bars then walked on.

‘Boy 206, Your time has come to an end. You have served your time of six weeks and will be released today’ Shouted master into the next door cell. I looked up as i realised my neighbour being released. I saw him being pulled out of his cell by my master and taken our of the dungeon. The door slammed behind them echoing around the basement before coming to a deafening silence as i realised i was alone. It made me wonder about my own release. Id never thought about my release date before or how id react going back outside. It seemed alien to me thinking about life without rubber and decided to not worry myself about it.

I woke up groggy thinking i must of fallen asleep by a few slaps across my face. I quickly realised i was on all fours with my hands and feet strapped to a cart. I was in my usual full rubber and could smell the rubber polish. surely i would of woken before now if i was placed on this cart and polished. I came to the assumption that i had been drugged as i felt groggy and had no recent memory. I was being wheeled on the cart into the next room where the dim light slowly made visible a few manly figures. I was positioned in the middle of the room where i could see a group of men gathering around me. I was confused as i could not hear anything. These men were clearly chatting, laughing and making noises but i couldn’t hear any of it. As i thought id gone deaf i felt that i had plugs in my ears under my rubber hood, I then was quickly blind folded before i could see anyone’s faces.

I could no longer hear or see, and all my senses focused on my ability to feel. I could feel the men touching me and stroking me. My already exposed ass was being fingered and prodded. I could feel the cart moving before a cock suddenly made its way into my mouth. I sucked as i was being pushed and pulled onto the cock. I was pushed onto another cock before feeling a cock slide easily into my ass. I felt dizzy as i was pushed around and disorientated. I could feel the men taking turns between both my holes. I could feel different men grab my body differently as they forced their way into me. with every cock i fell deeper into myself, i began to slowly not feel them pounding away at me from all angles. I could just feel the cart moving with each thrust. This was the first time id understood what it felt like to be a rubber toy. I was a play thing for these men. They did what they wanted with me and this brought on a huge feeling of satisfaction.